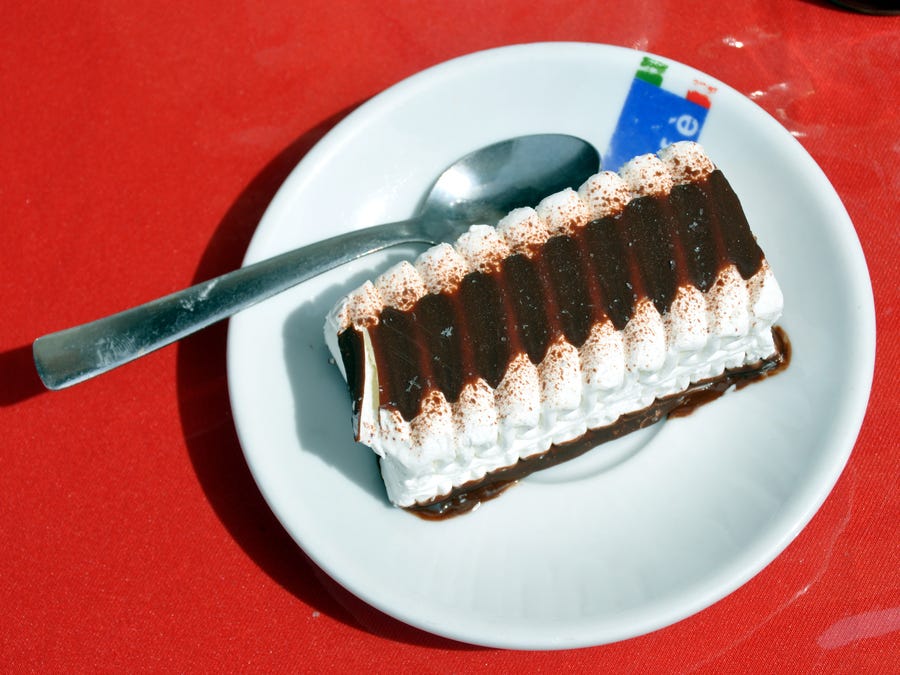 The frozen treat Viennetta disappeared from US shelves. Flickr/cyclonebill

If the idea of frozen food conjures up mental images of freezer-burnt pizzas and sad vegetables in aluminum trays, the items on this list will make you reconsider that picture. There's a wonderful world of frozen food out there — much of which is not available in the US.

From meals for one to desserts for all, there's sure to be something here to help those in the US plan their next vacation destination just to eat ... or simply be filled with envy.

Frozen pizza is a huge deal in Germany — and offerings like the Wagner Steinofen line are part of the reason why.

This steinofen — or stone oven — based brand is sold in 19 different varieties and if you like your pizza thin and crispy, you won't be disappointed.

According to the brand itself, one of its biggest sellers is the original Wagner Steinofen special, which is topped with Edam cheese, both regular and hot pepper salami, mushrooms, ham, and sun-ripened tomatoes. The Vegetaria variety offers a selection of roasted vegetables with a spicy kick.

UK-based bakery and cafe The Hungry Guest offers two frozen meals that sound almost too good to be true.

If you're in the US and the words "venison lasagne" and "venison and wild mushroom stroganoff" immediately make your mouth water, then you probably should hop on a plane and head to the Petworth or West Malling locations of this bakery/cafe.

Not only do they sound delicious, they apparently sell so well, the shop regularly sells out.

France has an entire grocery store that is dedicated to high-quality frozen food — and we want one of everything.

You might not expect France to embrace frozen food, given its intimidating reputation for only the best and freshest of everything — but in a grocery store called Picard Surgelés that only sells its own brand of frozen food, it has.

The Kitchn's Ann Mah moved to Paris and quickly found that the brand's dedication to variety and uncompromising quality have won over many native Parisians. And with offerings like a goat cheese, honey, and walnut pizza or some delightfully cheesy frozen gougères, it's easy to see why.

The company has expanded to several other countries across Europe, according to Kitchn, and even opened a few locations in Japan. Visitors from around the world — like SBS reporter Helen Barlow from Australia — can't get over how fresh Picard's offerings taste when compared with frozen foods in their home countries.

Belgian startup Mealhero is combining meal delivery service with frozen food and a “smart steamer” to help you cook it in no time.

There are quite a few startups similar to Mealhero available in the US, but those who have tried it know that it has some key differences.

The smart-steamer syncs with an app on your phone so you scan your meal and then just pop it in the steamer. According to a review on Tech & Leven, one of the absolute best things about this meal kit service is that your food actually looks like the photos.

The steamer is sized for one or two people — so this probably isn't the best option if you're cooking for more. But for those who worry about their meal kit foods going bad before they get used, this could be a useful option if something similar was available outside of Belgium and the Netherlands.

Quisinera is a startup in the Philippines that brings a rotating selection of food from talented home cooks straight to local freezers.

Founder Nina Co told Spot that her brand Quisina is short for "quick in the kucina (kitchen)" — and Quisinera highlights the home cooks she brings on from her local community to create these delicious frozen meals.

The result is varied and comforting frozen meals like squid and pumpkin stew, sweet and sour pork, and buttermilk chicken nuggets.

McCain frozen foods are available in the US, but India's offerings are drool-worthy.

If you live in the US, you may be familiar with McCain french fries, including the brand's signature smile fries. But in India, McCain's fries go to the next level, including tomato-flavored smile fries, chili garlic potato bites, and hot masala fries.

These offerings are sorely missed in the sea of frozen fries in the US.

Though people in the US are likely very familiar with Haagen Dazs, the brand frequently puts out limited-edition flavors that are only available in Japan —including options like the "Story Time" duo released in August 2018, which came in the flavors "Alice's Tea with Cookies" and "Snow White's Apples with Custard."

Other notable flavors are Sakura (cherry blossom) and strawberry tiramisu.

Viennetta was once sold in the US but is still sold in Europe and Asia.

If you live in the US, you may remember Viennetta, a layered vanilla ice cream treat covered in a ripple of chocolate. Though it was a staple of the '90s, as noted by Eater, it's no longer available in the US but is thriving in the UK. It's creamy, perfect for parties, and simply mesmerizing to look at.

Though there is no shortage of ice cream treats available in the US, some are still clamoring for its return.

Garbo, a frozen food company based in Italy, produces battered and bread-crumbed frozen foods with many designed to be served as small plates and shareable appetizers, including vegetables, fried cod, and rice croquettes.

Because of the brand's variety and flair not often found in the US, it would be a welcome addition to the roster of frozen foods stateside.

Nichirei is the king of frozen food in Japan and its products even come in vending machines.

Nichirei produces tons of different types of delicious frozen foods in Japan from grilled onigiri rice balls to prawn cutlets and everything in between. The products are fan favorites and making the company big profits. They are so ubiquitous, you can even find them in vending machines at train stations.

Frozen Japanese food doesn't have a lot of competition in America, so Nichirei's presence would be a welcome change.

Share Tweet Pin it Fancy Add
9 Foolproof Tricks That Can Increase Your Driving Comfort Feb 21, 2020
Why is my potty-trained child regressing? Here’s what to do, mama Feb 21, 2020